0
was successfully added to your cart.

The Antrim Brethren In Christ Church congregation first met in barns. The first worship service was held on January 19, 1884. A “meeting house” was built in 1885 out of hand-made brick. The structure had two doorways, one for the women and one for the men. The first preachers were Joseph Byers and J.D. Wingert who traveled from church to church, so that a pastor came to Antrim only about once a month. In the summer Antrim had Sunday School every Sunday. The church used no musical instruments to accompany singing, and each person had their own hymnal that contained only the words to the songs. 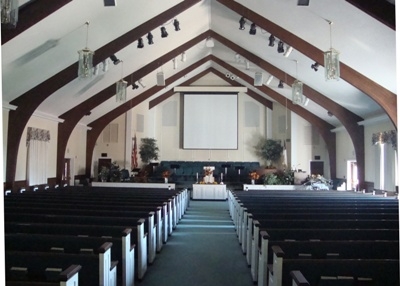 Love Feast was a big event for the Brethren In Christ. The two-day event was held twice a year. It was considered a time of fellowship and spiritual gathering. Meals were simple with sandwiches, soup, and other light dishes prepared by the deacons and their wives.

In 1928, attendance within the church dropped and the decision was made to close. During this time, the idea of each church having its own minister was circulating among the Brethren In Christ. In 1935, in an effort to restart the Antrim Church, John and Ida Byers were assigned as the first permanent pastoral couple. Being directly after the Great Depression, growth was slow and monetary help was not immense. However, the church’s growth after reopening can possibly be accounted for by the loyal returning members, prayers, outreach to the community, and the pastor’s care and visitation. Not long afterward, the building was restructured, moving the pulpit, creating one front door, and adding interior steps and classrooms in the basement. This structure is still in existence at 9745 Antrim Church Road, Greencastle.

After 26 years of service, John Byers died and was succeeded by Rev. Harvey Musser. At this point, a parsonage was built across the road from the church building. Rev. Musser was the first to live in it. Rev. Musser served as pastor from 1962-1967 and was succeeded by Andrew Slagenweit from 1967-1972. Charles Rife filled in as an interim pastor from 1972-1975. Then, Paul McBeth came to fill the pulpit for a little over a year.

In 1976 Reverend Wilbur Benner came as the pastor. At that time plans were being made to add an addition onto the exiting church building. Amos & Louise Hege offered land from their farm on Kauffman Road and Route 11 as a site for a new structure. Groundbreaking was held on August 29, 1976, and the cornerstone was laid in May of the following year. In June 1977, a large motorcade of approximately 100 cars made its way from the old building to the new. This was “Dedication Day!” The sanctuary overflowed with approximately 700 people! The old building was sold to Mennonites who currently use it for their worship services.

Antrim BIC expanded to two worship services in 1986. Due to this growth, a new wing was added in 1988. The new wing provided a new kitchen with fellowship hall, pastor’s offices, an expanded library, and more classrooms.

Due to his declining health and the rapid growth of the church, Pastor Benner decided to resign as Antrim’s Senior Pastor to pastor a smaller church in Williamsport, Maryland. He had served Antrim for over 16 years.

With the recommendation of Pastor Benner, Reverend Steven Munger from Minnesota was asked to come and serve as Senior Pastor in August of 1992. At this time the Brethren In Christ denomination allowed pastors to provide housing for themselves if they chose to do so, and Pastor Munger bought the parsonage from the church, and he and his family made their home there.

Reverend Ky Searcy came in September of 1993 from Minnesota to serve as the Assistant Pastor. Under Pastor Munger, the church continued to grow, and a youth pastor was hired in 1996. That same year the sanctuary was remodeled with new pews, carpet, curtains, chandeliers, hymnals, a larger platform for the choir, and a state-of- the-art sound system were added.

In 1999, Pastor Munger was offered the position as Assistant Director of Brethren In Christ World Missions and responded affirmatively to this calling. Pastor Ky Searcy served as interim pastor until February of 2000 when Dwayne Potteiger, was hired as part-time senior pastor. In September of 2000, Pastor Potteiger took the senior pastor position full-time. He served at Antrim for 9 years.

A new position was added to the staff in 2007, as Bruce Prestidge assumed the role of the Executive Pastor. He served in that capacity until August 2009. Following the departure of Dwayne Potteiger and Bruce Prestidge, Dr. Ron Susek assumed the role of interim Senior Pastor. He accepted the position of full-time Senior Pastor in 2010. Pastor Rob Gowing was hired as our Pastor of Worship in 2009.

Following the departure of Dr. Ron Susek in 2013, Antrim BIC embarked on a new Team model of Leadership that has been working extremely well. Pastor Buck Besecker was hired as a consultant to help the staff and congregation move forward with this plan of leadership. Pastor Besecker worked with the Board and Staff of Antrim for two years and was instrumental in leading Antrim Church into the Team style of leadership. The Pastor of Worship Arts, Rob Gowing, assumed an Administrative role and, in 2014, assumed the position of Board Chairman. Pastor Matt Sargent moved into the position of Preaching and Small Groups Pastor. Pastor Ky Searcy remained the position of  Pastor of Congregational Care. Sarah Layton continued in her role of part-time Children’s Ministry Director and Stacy Britner was hired as a part-time Children’s Ministry Assistant. Brent Hey was hired as our part-time Youth Ministry Director. In 2015, Brent’s position became full-time as our Youth Ministry continued to grow. Tammy Weller was hired as Office Administrator in 2013 and Kaitlyn Miller joined the staff in 2015 as the part-time Office Assistant. In 2016, Matt Sargent and his family moved from the area and stepped down as our Preaching Pastor. Pastor Adam Meredith was hired to fill this role. In 2017, Pastor Ky Searcy retired after serving the Antrim Congregation for 24 years. Pastor Casey Hurst join our team as our new Pastor of Congregational Care. In 2018, we added two new positions to the growing staff: Allison Trobaugh was hired as our Director of Women’s Ministries and Natalie Stein as our Clearance Coordinator. 2021 & 2022 were years of transition and growth for our Antrim Church staff. Pastor Adam Meredith stepped into the role of Senior Pastor. Sarah Layton stepped down from Children’s Ministry Director and Kendra Angle stepped in to fill the role. Emma Trobaugh moved into the position of Nursery Director. Tammy Weller stepped down from Office Administrator taking a part-time position as Graphic Designer and Kaitlyn Miller moved into the position of Office Administrator. Melody Horvat joined our office staff as the Office Assistant. Pastor Rob Gowing retired from his position of Worship & Administrative Pastor. Brad Graham joined our team as Administrative Pastor and Rod Horner as our Worship Arts Pastor.

Our Antrim family continues to grow as we welcomed many new families and continue to offer several ministries. Our Worship Services are live streamed at https://antrimbic.org/videos/

We are praising God for this continued growth. We are excited to see where God is going to lead us in the coming year.